Imagine taking a stroll to your nearest park and not being assailed by the sight of a celebrity trying to sell you xyz cream or an airbrushed model wearing the latest jeans. It seems that without anybody noticing, our public areas have become advertising spaces and you can't even look out of your office window without your eyes meeting a silent salesman's. The city of Sao Paulo decided to fight back and enacted the Clean City Law of 2007, which did away with almost all forms of outdoor advertising: come 2011, the results have been astounding. 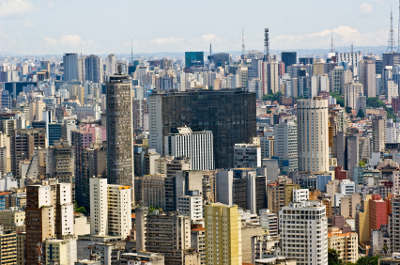 In total, about 15 000 billboards and 1 300 metal panels were removed. The city that revealed itself from beneath the commercial sheen has shown itself to be both beautiful and dilapidated. Outdoor advertising often hid buildings in need of urgent renovation, whose inhabitants could not afford the very products their buildings were advertising. At the same time, architectural sleeping beauties were awoken by the kiss of sunlight and there has been a renewed interest in buildings long forgotten.

The law also spurred building owners to renovate their buildings with funding from the city. Even the advertiser who vehemently opposed the move have found new and less intrusive avenues to advertise their wares - with digital advertising seeing significant growth in the aftermath. The video below shows some of the changes the city has undergone.

A different type of change is happening in New York, with urban artists subverting the commercial messages of posters. The most famous artist of this type is 'Poster Boy', who has had many run-ins with the law 'modifying' posters in New York's subway. Some of his work is undoubtedly creative and original, but advertisers argue that this brand of art is no better than graffiti - a public nuisance at best and pure vandalism at worst.

What do you think of outdoor advertising? Is it a blight on our cities or a necessary part of life?