A Ski Helmet Can Help Save Your Life

'Every day I think 'I'm Alive,' and remember how lucky I am to be here after such a close call.'

26 year old Charlie was helping out a friend the day she had her accident, and had just started the second week of a two week teaching stay in a freestyle camp in the resort of Mayrhofen in Austria, where she was coaching snowboarders 'freestyle training' in the snowpark. She wasn't teaching that day, but showing the new arrivals around and practising some tricks at the snowpark that she had already gone through many times before.

" I took the jump, landing awkwardly, falling backwards. My helmet tells the story: you can see a small dent, on the inside you can see where the shock has damaged the polystyrene lining"

Charlie didn't always wear a snow sport helmet on the slopes, but did in snowparks or off piste, and looking back was relieved that that day she was wearing one.

'I had done the jump over and over again that day, although I don't remember that. It was a daily activity for me. My friend Jay, the owner of freestyle camp, was watching me when the accident happened. He says the run was quite rutted and I took the jump at an odd angle, landing awkwardly, falling backwards. My helmet tells the whole story: you can see a small dent on the outside but on the inside you can see where the shock has damaged the polystyrene lining.'

Charlie's friend Jay immediately called for help and she was in a helicopter being airlifted to the local Mayrhofen clinic within 9 minutes. On arrival, however, the clinic insisted that her state was so serious she needed to be taken to Innsbruck. There Charlie was put into an induced coma for ten days. Her parents arrived on the second day, and after 6 further days in aftercare, she was flown home in a private jet to Luton to Dunstable hospital, near her parents' home. Charlie, however, remembers none of this. 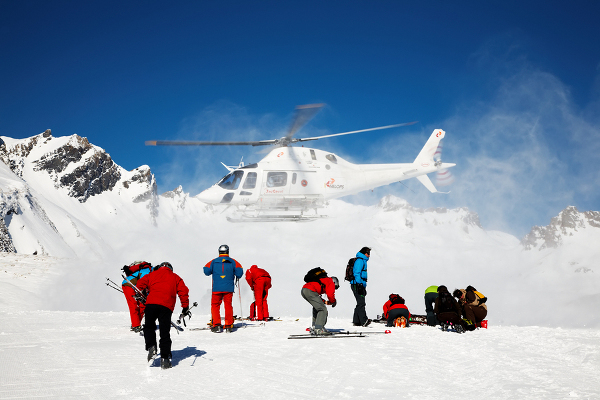 Charlie had to be airlifted to hospital after her accident

"I spent a long time, 5-6 weeks, in a complete blackout. I don't even remember waking up, which people often ask about. It took me two weeks to wake up fully. I then slowly began to recognise the hospital routine, started remembering things and only then, six weeks after the accident, did I start to walk. I was very lucky in that I was very fit prior to the accident, which helped my recovery tremendously. I was always extremely athletic, taking part in gymnastics from the age of three for instance, and my muscles seemed to have a memory that helped me remember things like walking, and regaining balance (although that is still ongoing!).

All in all I spent only three months in hospital, which is not long in comparison to many head injury victims.'

"Charlie worked on and off with a psychologist and life coach as she had to relearn everything; from how to be in friendships and relationships, to priority of thought"

The non physical side was very different however. The minority of head injury victims suffer from long term memory loss; no recollection of family, friends, their home nor their youth. Charlie reports that she did have short term memory loss: whilst at hospital her mum would ask her what she'd had for breakfast that morning and she would have no recollection. Charlie also snoozed and drank water a lot over the next year, feeling perpetually thirsty. She also worked on and off with a psychologist and and almost 3 years later, a life coach as she had to relearn everything; from how to be in friendships and relationships, to priority of thought and how not to catastrophize; ie not panicking about the smallest issues.

'My parents got a lot of support from the hospital and the UK charity Headway; but each time I would point out how hard everything was, mum replied that I didn't realise how hard it was for them too. Of course I never saw what she saw - her own daughter in that condition - and my mum and dad have images in their head that they will never forget.' 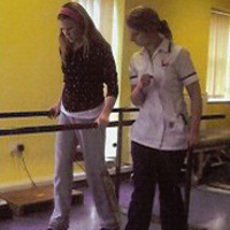 Charlie had some occupational therapy and physio in hospital but admits that it was her determination to get fit that helped her recovery.

'I wanted to get back to teaching and my ski school wanted to see that I had been signed off from hospital before I was insured to instruct on the slopes. Immediately after hospital, I retook up jogging, swimming and cycling as I was determined to do it. Regaining my fitness was my goal.'

It was only eight months before Charlie hit the slopes again at an indoor slope, with the two friends who had witnessed her accident: ''It was like 'riding a bike' as they say. I got straight back into it and it felt fantastic.'

Two months further on and Charlie's snowboard school boss gave her her job back to instruct after seeing her level of snowboarding.

Two years later, Charlie went onto to do a course with BASI to train as an adaptive snowboard instructor. She hasn't yet got her certificate, but knows that this is what she wants to do: 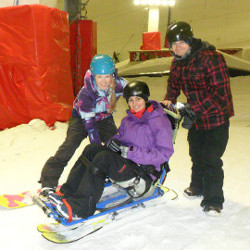 'This has shown me my path now; it took a while to see why this happened, but everything happens for a positive reason, even if it takes some time to notice why. I worked at the Paralympics for a few weeks and hope to get involved in the Sochi Winter Paralympics, as this will be the first Winter Paralympics in which snowboarding is in the programme.

I want to teach people who really want to learn and aren't just looking at this as a two week holiday, as I can relate to that feeling. I remember saying whilst bedridden to my parents in tears 'will I ever snowboard again?' before I could even walk!

After all I've been through I know how hard it can be and the massive amount of determination you need. I also recently started doing some volunteer work with a disabled association not far from where I live in Switzerland. Having gone through a disability myself and a fairly quick recovery, I am very keen to be working with and helping others, especially those with brain-related disabilities.'

Charlie has also recently become involved with Headway, helping promote the Kevin Pearce movie Crash Reel which tells the story of Kevin's fall, head injury and then recovery. Charlotte is keen to encourage people to wear their ski helmet as she knows it saved her: 'I now wear a helmet on and off piste, as well as cycling. Without my helmet things would have been much worse, even fatal. A helmet could save your life.'

Charlie Elmore lives in Verbier, Switzerland and has been teaching snowboarding for eight years. She is currently studying to become an adaptive snowboard instructor to work with disabled people, something she feels her recent experiences have equipped her for. Three years after her accident she finally feels that she is close to full physical recovery, although she admits that she wil be still healing psychologically for a while yet.