My first Christmas in a foreign country: I had been looking forward to it for well over a year. Christmas on Bondi beach. How cool would that be?

And then the day came. We filled the cool box, packed our beach towels, and headed off for sun and surf. Just like every other weekend I had spent in Sydney. The day itself was a complete anti climax. There was nothing to mark it out as being special, or different from any other day. And I missed everything about my usual Christmas: my family and friends, the rich food, the stockings, the rubbish TV, even the weather.

Christmas in the heat just didn’t seem right. And, despite copious amount of houses and shops displaying Santa Claus, snowmen and tinsel, it just didn’t feel at all Christmassy. I just came away with the feeling that I had ticked that one off the list.

But there are many people who openly embrace the idea of Christmas away from home and make that a tradition in itself. A random of poll of my friends and acquaintances revealed that Rebecca and her husband Jonathon have been away at least every other Christmas since their boys were born almost eighteen years ago. They have spent Christmas in a number of the Canary Islands, as well as Cyprus, Tunisia and Morocco.

“One of the best things about it is that it solves all those family “discussions” about who you are going to spend Christmas with,” says Rebecca. “We just come back to people telling us how they were thinking about us enviously whilst they were watching some awful TV with their in-laws.”

“It’s also been really good for the boys to see how different cultures “do” Christmas, from Spain where everything centres around celebrating Christmas Eve and heading off to Midnight Mass to celebrate the birth of Jesus, to Morocco where they don’t celebrate it all.”

It helps that Rebecca and her family aren’t too entrenched in the idea of a traditional Christmas. “We always go self catering which is extremely flexible, but it does mean that we’ve had baked beans on toast and Pot Noodles for a couple of our Christmas dinners. “

But they don’t abandon Christmas totally. “Although we open our presents before we go, we do take stockings and make sure there are plenty of things to unwrap. We also take some decorations, the boys’ advent calendars and a pop up Xmas tree. It’s about 30cm tall with baubles. And of course, the most important thing is to leave a note for Father Christmas so that he knows where we are.” 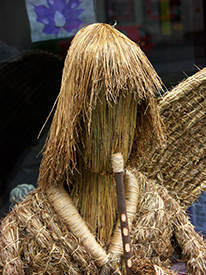 Another friend, Clive, has spent a number of Christmases in Sweden where he loves to immerse himself in the culture. “A Swedish Christmas is very social. They start celebrating much earlier than us, from the beginning of December, and Glogg, the Swedish vodka based mulled wine, is pretty much the drink of choice from then onwards.As you get closer to Christmas, it gets stronger and stronger. There are also a lot of parades where children dress up as angels or come into offices and sing Christmas songs for weeks before Christmas itself. In fact, because of the dark days and chilly, snowy weather it actually feels more like Christmas than it does in the UK.”

The Importance of Knowing Christmas Customs

Making an effort to understand the customs and traditions is important as another friend Ian found when he visited Denmark to stay with friends. “After a massive lunch out came this huge rice pudding they call Risalamande. It was about the size of a washing up bowl! I was told that there was an almond hidden in the pudding somewhere, and that whoever found it would get a prize. So, when I found it in my very first scoop, I excitedly announced it to everyone. A deathly silence ensued. What they had failed to tell me was that the idea behind the game is that, even if you do find the almond, you are supposed to keep it quiet, and make everyone eat their way through the pudding after a heavy meal.”

Ian continues, “I had also been told to bring over a number of worthless things, wrapped very nicely, to play a game. So I found things like a key I didn’t use and wrapped them up very prettily. The parcel game begins with everyone putting their wrapped up packages in the middle and then throwing a dice to claim parcels. If we threw a double we could claim a prize from the centre of the table (without unwrapping it yet). The next round involves stealing packages from other people. We were playing with two children and of course everyone made sure that they ended up with the most parcels at the end. However, where I had taken “worthless” literally, what they had actually meant was something that you didn’t want anymore, but someone else might, such as the lovely toy car one of the boys unwrapped. My parcels, beautifully packaged, were left until last, and I squirmed uncomfortably as one of the boys excitedly unwrapped the key and asked what did it open? You can imagine the disappointment in his eyes when I told him it was actually just a key. Next time I would certainly drill down and find out more about what we will be doing!”

Making The Most of Christmas Abroad

Keep Up To Date