Itâ€™s been said over and over again, but the world truly is a beautiful and fascinating place. Our planet is filled to the brim with endless opportunities and itâ€™s up to us to take steps to discover them. While it would be impossible for me to list all the incredible things to do around the world I have, with great difficulty, narrowed it down to 10 travel must do's - a travel bucket list if you will.

If you have done any of the activities on the list or think we have left something awesome out, drop us a comment in the box below or on our facebook page. If you want to see the images in all of their glory, check them out on Pinterest. 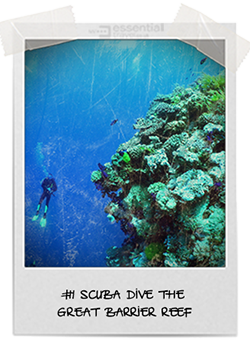 The Great Barrier Reef off the coast of Australia is a remarkable structure. It can be seen from outer space, stretches over 1,600 miles and is bigger than the Great Wall of China. Itâ€™s completely understandable why itâ€™s at the top of many peopleâ€™s wish list to scuba dive or snorkel here. The reef is rich in aquatic life, from the smallest exotic fish to the largest sea creatures. Starfish, clownfish, sea turtles, dolphins and whale sharks are all creatures you can see in the clear ocean water. For the best diving conditions, go between late August and early December, although people generally dive there throughout the year. If you plan on diving the reef, make sure you've taken out travel insurance. 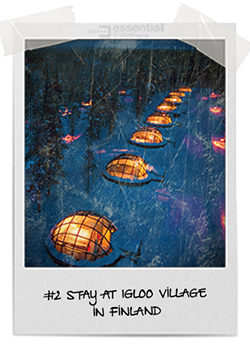 The ultimate Finnish adventure can be experienced at Kakslauttanen. Imagine the feeling of fresh snow all around you, husky dog sledding and sleeping in an igloo. Igloo Village has many snow and glass igloos for you to choose from. The snow igloos add to the authenticity of the experience as you get to sleep like an Inuit, wrapped snugly in a down sleeping bag inside a house made of snow. The glass igloos are for a more modern experience: spend the night in an igloo made of glass so that you can lie in bed and watch the stars above you. If you are lucky enough, you could even witness the magic of the Northern Lights from your bed. Make sure to book in advance as the glass igloos are only available from the end of August until the end of April and the snow igloos are built in December, depending on the weather conditions. 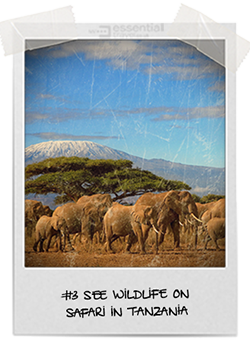 While many tourists flock to various African countries to see the abundant wildlife, Tanzania really stands out with 40 game reserves and national parks. Lets start with Mount Kilimanjaro National Park. This park is home to herds of elephant and buffalo, prowls of leopards, lots of monkeys and the endangered Abbottâ€™s Duiker. And an added bonus is that you get to experience this wildlife against the backdrop of Africaâ€™s highest peak. Another popular park to visit is the Mikumi National Park, where you can see giraffes, elephants, lions, hippos and wildebeest. Going on a wildlife safari is always a great adventure, so it's always best to make sure you've purchased travel insurance before your trip.

The Great Pyramids Of Giza - Egypt

For those fascinated by ancient history, this is something that should definitely be on your travel bucket list. Right on the outskirts of Egyptâ€™s capital, you will find the world-renowned Pyramids of Giza. The Great Pyramid, the largest of the three, is a tomb to the pharaoh, Khufu, and itâ€™s the only one of the Seven Wonders of the Ancient World that still stands today. Upon entering the tomb, you will notice that the coffin stands empty - one of the many mysteries of the pyramids. Itâ€™s a humbling experience to stand in front of something so huge, knowing that there was no modern technology to build this majestic structure. Another famous structure is the Sphinx, the mythical creature with the body of a lion and the head of a pharaoh. There are plenty of tours in Cairo that will take you to the Pyramids of Giza and let you explore the interior of the pyramids and the ancient tombs, such as Pyramid Tours.

Handy Hint: If you find yourself at an Egyptian Souk (market), knowing How To Bargain While Travelling will be a priceless asset. 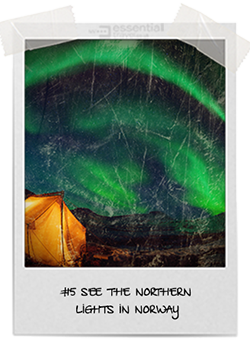 When the earthâ€™s conditions are just right and the perfect amount of energy particles collide in the Northern skies, the natural phenomenon of Aurora Borealis occurs, better known as the Northern Lights. Thereâ€™re very few people who would pass up the opportunity to camp in a tent on the snowy ground while watching the awe-inspiring lights. Tromso in Norway is said to be one of the best places in the world to witness this beauty as itâ€™s located right in the middle of the zone. But make sure to head there between September and March as Tromso is also the land of the midnight sun - itâ€™s light 24 hours a day from April until August. 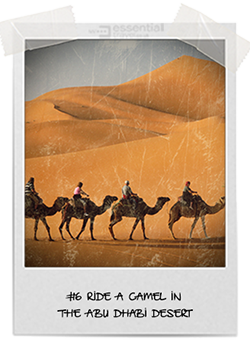 Abu Dhabi has become one of the richest countries in the world, but it is also rich in culture. If you want to take part in some form of cultural activity, riding a camel is one of them - in the Abu Dhabi desert. The desert takes you away from the city life and endless shopping to a land of tall, mountain-like sand dunes, and camels. Camels were a popular mode of transport in the desert, mainly because of the length of time they can survive without food and water. This came in handy when transporting goods to distant places. Get Your Guide offers a great tour where you go on a safari of the alluring desert while riding a camel. They also provide some light snacks and traditional Arabic coffee and tea to drink. I advise that it's best to be safe and take out some travel insurance before you embark on this adventure. If you think that you need something even more adventurous, try some camel racing. You can read more about this in our Abu Dhabi 24 Hour Guide.

The Dead Sea - Israel and Jordan 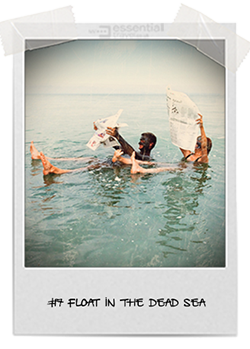 The Dead Sea is so highly concentrated with salt that itâ€™s impossible to sink. People often take pictures of themselves floating in it while reading a book or a magazine - just to show others how truly magnificent the phenomenon is. Luckily for travellers, the climate is sunny throughout the year, so thereâ€™s no excuse not to head straight for the cool water. Even more reason to soak in the Dead Sea is the fact that minerals found in it are often used in spas for health and skincare - it's like getting a full body treatment for free, courtesy of nature. The unique beach pebbles formed from the sea's high concentration of asphalt, make the whole scene even more alluring. 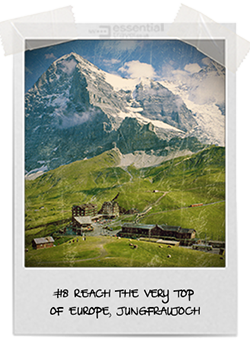 Jungfrau Mountain in the Burnese Alps boasts the highest railway station in Europe. Tunnels were also strategically created in this icy, snowy-covered mountain so that it could feature a hotel, restaurants and the Ice Palace, making it the most popular tourist destination in the Alps. No matter what the weather is like, the shiny Ice Palace is always open to visitors. The palace features numerous creatively carved ice sculptures - some of the most popular being polar bears, penguins and eagles. For a memorable tour of the mountain, check out Meier Tours, which begins with a scenic train ride to Jungfraujoch, before going on to explore the snow-covered mountain and the amazing views from the Sphinx Observation Terrace and then experiencing the Ice Palace. Dubbed the Top of Europe, Jungfraujoch is likely to take your breath away. 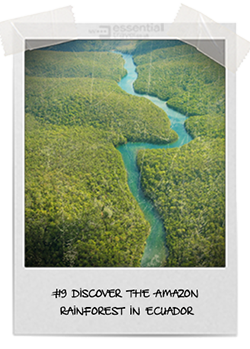 You donâ€™t have to be a nature enthusiast to appreciate the largest tropical rainforest on the planet. The Amazon is raw, natural beauty inhabited by the world's largest eco-system of plant and animal species. From small insects and exotic birds such as the toucan, to bush babies and jaguars, this is the epitome of really experiencing nature. If you're looking to do your bit for conservation, why not sign up for volunteering to help preserve it. i-to-i Volunteering offers a 2 to 12 week Amazon preservation programme in Ecuador, which gives you the opportunity to explore the rainforest while learning about ways to save it. 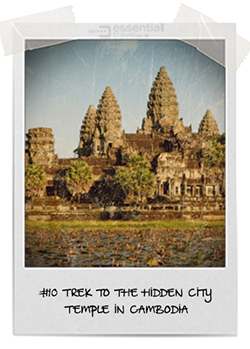 The Hidden City Temple, better known today as Angkor Wat, took about 30 years to build and is the worldâ€™s largest temple. Featured on Cambodiaâ€™s flag, the temple attracts tourists all year round and itâ€™s definitely something to see at least once in your lifetime. Feel inspired as you walk up the ancient paths as you begin to get a glimpse of the lotus-shaped towers in the distance. Surrounded by a moat, the city is protected from the surrounding jungle, which has also kept it from damage or destruction since it was built in the 12th century. Tour Angkor Wat offers tourists different ways to tour Angkor Wat, such as trekking and bicycle tours. This is an experience unlike any other and one that you'll most likely cherish forever.

How To Bargain While Travelling

We give you the best advice on bargaining while travelling. How to haggle on prices, avoid being ripped off and say the right things to bag that bargain.

After graduating with a degree in English Literature and a passion for writing, Zoe finally ended up at Essential Travel. An avid animal lover, Zoe is also an enthusiastic traveller and loves the richness it brings to one's life. Born in London, she has been to many European countries, the USA, Thailand and Singapore, making her always keen to inform others of the wonders of travel through her writing.