The food may give you an upset tummy and the tourist attractions might be disappointing, but the one thing that is always worthwhile is a view from up high. No matter the location, a birds eye view of any city is worth the price of your flight alone. To see the bustling activity of a metropolis, gives context and allows us to step back and admire human industry. Read about what we consider to be the best skyscraper observation decks and make sure to add them to your to-do list next time you find yourself in one of these international cities. 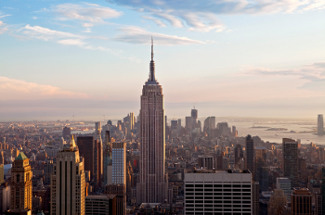 The "grande dame" may not be as shiny as her successors, but the original 'tallest skyscraper in the world' remains the benchmark that all architects measure themselves against. The building takes its name from the State of New York's nickname - the Empire State. Like the current tallest building in the world below, the Empire State Building was constructed in a time of economic depression; a time when new tenants where more likely to jump out the window than enjoy their good fortune. Construction of the site was immortalised in images by the photographer Lewis Hines: showing the struggles of the working class during the depression against the backdrop of the building. The Empire State has two observation decks - one on the 86th floor and the other on the 102nd floor. It's advisable to buy tickets in advance, as the lines to get tickets are often as long as the building is tall.

Willis Tower, still commonly called the Sears Tower (the name of its previous owners), is the pinnacle of Chicago's skyline and represents a time when the US was ascendent in the race to the sky. What is referrered to collectively as the Willis Towers is in fact a collection of nine seperate tubes terminating at different levels; the tallest tube cresting at the 108th floor. Five floors down, on the 103rd floor, is SkyDeck - an attraction for suburban daredevils (for the whole family to enjoy). The deck is a completely transparent box that juts out from the building, with nothing between you and the street 412 metres below - don't worry though, it was designed to hold at least 10 000 pounds. The experience begins with a lift that zoops (that's a made-up word to describe the speed of the lift) you up to the top floors in a little over a minute. Then the brave can step out at height to enjoy views that extend across four states.
Watch the promotional video for SkyDeck below

Canadian National Tower, shortened to CN Tower, is the upside down exclamation point of Toronto's skyline. Technically not a skyscraper, it squeezes onto our list by virtue of its observation deck and the strange list of records it currently holds: the world's highest bar, the world's longest metal staircase, the world's highest revolving restuarant and the world's highest wine cellar. The last two awards are for the 360 restuarant - a dining experience on clouds. The cheapest and least time consuming way to get a bite and a view at the top is with a Toronto CityPASS - which grants you access to five Toronto attractions over nine days. 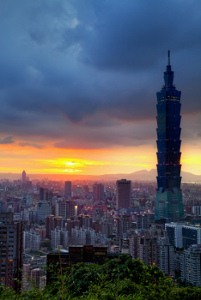 Taipei 101 had a short reign as the tallest skyscraper in the world from 2004 to 2010 when the Burj Khalifa toppled it. Combining traditional architecture with high-tech innovation in a fluid design that had NewsWeek naming it one of the Seven Wonders of the World in 2006. Nothing in it's design is left to chance: the eight sections of the building represent the Chinese lucky number eight, feng shui touches are everywhere and the tiered pagoda design reduces wind noise at heights. Visitors wanting to view Taipei from height have a choice between an indoor observatory - on the 89th floor - and outdoor observatory on the 91st floor. The view is pricey when you consider the cost of food (you can't take food up), but visiting Taipei without seeing it is like going to Paris and neglecting the Eiffel Tower.

The mark of an economic powerhouse is the ever-rising floor count of its new buildings; and so the long list of Chinese supertall skyscrapers is no surprise. The most impressive of these is the Shanghai World Financial Centre in the Pudong district of the largest city in China. If ever you wanted a gods perspective of human industry, this is the tower and this is the city. The highest of the three observation decks is currently the highest in the world at 474 metres; to put that in perspective, that height is roughly four times the length of a football pitch. Prices vary according to the observation deck you choose to visit: the lowest deck being the cheapest, but an all-inclusive tour is available for about Â£15.

Like CN Tower we prefer to think of Sky Tree Tower as a skyscraper masquerading as a tower. The building is freshly built and it's observation decks - one at 350m and the other at 360m - are set to open on the 22nd of May this year (2012). As you would expect - demand for tickets is high, with sales beginning on March 22 (a Japanese credit card is required to make a purchase online). This is an attraction for the trendsetting traveller who wants to be the first to see Tokyo from this fresh vantage point; the rest of us may have to wait a while for prices to cool down. 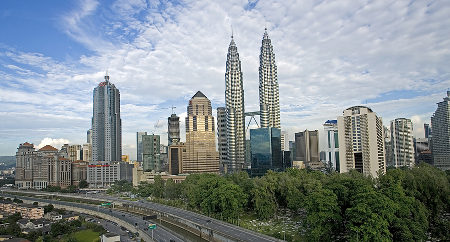 Believing that Sean Connery could be a nimble thief in the film Entrapment was difficult, luckily his co-star, no not Ms. Zeta Jones, but the stunning Petronas Towers made the film watchable in parts. The climatic scenes of that movie were filmed when the building had just been finished and crowned the tallest in the world - a title it soon lost to Taipei 101. Like its successor the design draws on traditional elements, in this case motifs from Islamic art - particurlarly in its cross-section shaped like Rhub el Hzib (the shape used as a chapter marker in Arabic calligraphy). Between the towers is where you'll find the best views - at the Skybridge 170 metres up. Disconcertingly the bridge sort of hovers between the towers, so that it sways with the towers instead of being fixed to any individual tower. If your up for the experience of visiting the swaying bridge note that tickets are often limited and it's best to buy early or get up early to secure your place. 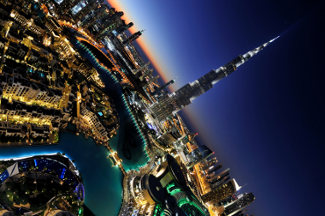 What does an oil-rich nation do with its windfall? Build a skyscraper. Not just any skyscraper, but the tallest skyscraper in the world - exceeding the next best by a whopping 300m. The price for this extravagance: $1.5 billion! Burj Khalifa is the centrepiece of the new Downtown Dubai development area. As with all iconic skyscrapers the building was completed just in time for an economic reccession making it a rather empty white elephant, but who are we, mere mortals, to question what looks like a structure Zeus himself would sit atop and throw thunderbolts from. Experiencing godly heights is cheaper by appointment so be sure to plan ahead for your trip and save yourself some Dirhams. Of course, as is expected in Dubai, there are shops at the top as well.

Palace of Culture and Science 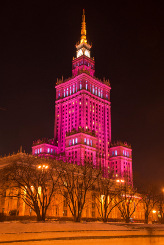 Outside of Poland, the Palace of Culture and Science is not too well known and sadly, it's not even well liked by Varsovians (the locals). The building was a 'gift' from the Soviet Union to Poland modelled on the Moscow State University. Although it can't compare to the colossal constructions of the Middle East and Asia it's proof that better need not be bigger. Within it you'll find exhibitions, a theatre, a museum and of course, the observation deck 114 metres up. Though the locals may not like it much, it is popular with tourists and with UEFA 2012 around the corner it may just get the attention it deserves.

Londoners have a perverse sense of humour when it comes to naming buildings: 30 St. Mary Axe became 'the Gherkin' and now a respectable name like London Bridge Tower has been cast aside for 'the Shard of Glass'. Yes, the Shard of Glass. Soon all the cities landmarks will be items you find around the house. But despite it's humble name the Shard is quite a feat of architecture; in the post 9-11 world it marries a beautiful glass facade with stability, such that it could withstand even a heavy attack. As part of a quartet of new skyscrapers - including Bishopgate's Tower, 122 Leadenhall Street (the Cheese Grater) and 20 Fenchurch Street (the Walkie Talkie) - it manages to capture the growing stature of London as the cosmopolitan city of choice. An observation deck will be open to the public sometime in early 2013, but you can sign up now to get the latest news on when it will open.

For further insight, check out the video below.