Look on the bright side this winter and celebrate the chilly conditions by taking to one of the UK's wide array of stylish and beautiful outdoor ice rinks.

One of the most gorgeous historical buildings in London also happens to be the setting for one of the most famous outdoor ice rinks in the world. Somerset House comes to life over Christmas, hosting daily swarms of people on the magnificent outdoor rink. The huge Tiffany's Christmas Tree gives it a festive atmosphere that makes it perfect for families, friends or couples wanting to get on the ice in a special setting they won't forget. The fun doesn't stop at skating though - check out their website for details about storytelling sessions, club nights, shopping and more. If you are planning to visit over a weekend, book in advance and make sure you arrive ahead of schedule. 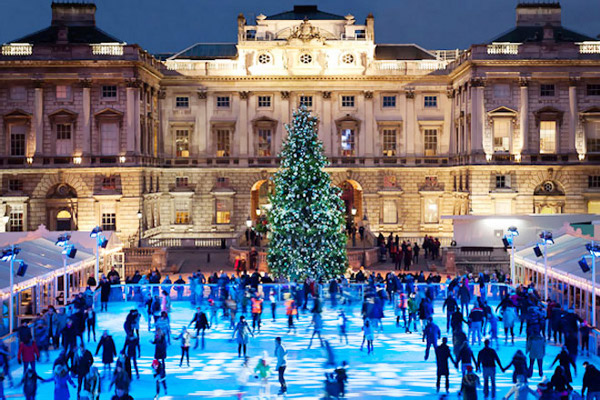 The outdoor ice rink at McArthurGlen's Yorkshire's Designer Outlet is the main attraction at a Christmas bonanza that involves a market, discount shopping at the outlet, Santa making an appearance and a selection of traditional rides (dodgems, a ferris wheel, helter skelter and more). The rink is surrounded by stylised log cabin stalls, where you browse and do some last minute novelty shopping when you're taking a break from the ice. At the center of all this is the thirty foot Christmas tree that sets the tone for a magically festive outing with the whole family. A magical must. 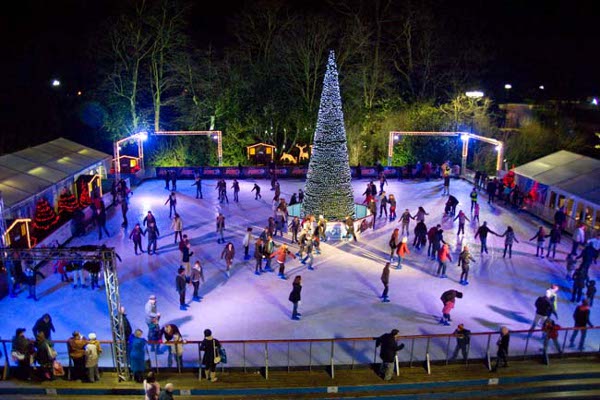 There is a magical mingling of fairy tales and history at the Hampton Court Outdoor Ice Rink. The grounds outside the palace make the ice rink look like the set from the Nut Cracker or Swan Lake, while inside the palace you'll find artifacts from King Henry VIII's reign lining the corridors. At night time the rink is illuminated by spot lights that make the grounds come to life, while the River Thames rushes along in the background. Christmas and New Year celebrations get very festive and spots fill up quickly, so book in advance to avoid disappointment. 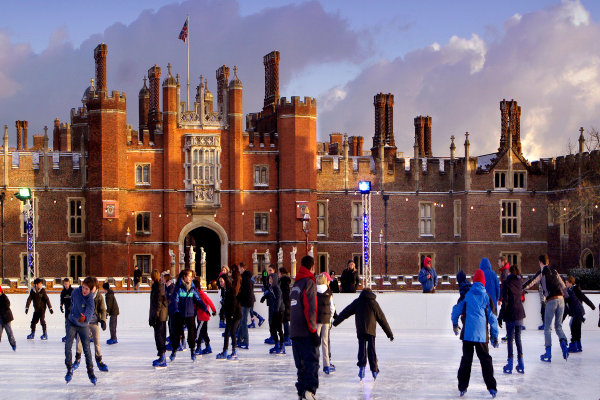 Our pick for the most charming of these venues, Winter Wonderland in Cardiff, brings a number of Christmas favourites to the Admiral Open Air Ice Rink. The ice rink itself is more than enough to keep visitors happy, but when you look around you'll get a sense of the Christmas magic that turns good venues into fantastic experiences. There are stalls surrounding the ice rink, selling mulled wine, hot chocolate and other extras, while the brightly lit BT Infinity Star Ride - a thrilling 60m high spinning chair ride (the only one of its kind in the UK) - gives visitors a panoramic view of the Welsh capital city. The whole area is lulled by Christmas songs and decorations, doing the name 'Winter Wonderland' justice.

And if you enjoy the thrills of the Winter Wonderland, the excitement of skiing should be perfect for getting your heart beating a little faster. Here are the Top 10 Ski Resorts, especially suited to families.

If London's South Bank isn't festive enough as it is, the Eyeskate Arena comes along and quadruples the drama for the festive season. In the shadow one of our capital's most iconic man-made features, the Eyeskate arena is set against one of the most sparkly and joyful light displays in the city. Expect some cheerful background music and large crowds, with a very happy atmosphere. If you are a bit intimidated by all the people there, rather take a ride on the Eye and appreciate the city from a bird's perspective. 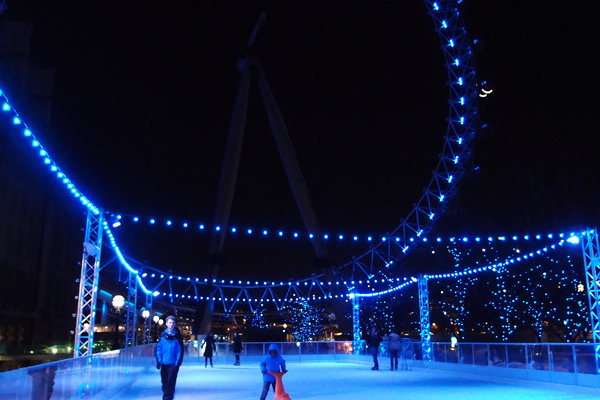 Our choice for the best UK Christmas Destination also hosts one of the finest outdoor ice skating rinks in business. It's more than just the rink that makes Edinburgh such a cracking city to be during the festive season - you are surrounded by an entire carnival of attractions that make the chilly weather seem like part of the show. With cups of mulled wine never more than a cat-call away, the Edinburgh Eye in the background and some of the most haunting architecture in the UK as your backdrop, the setting in pretty enchanting. 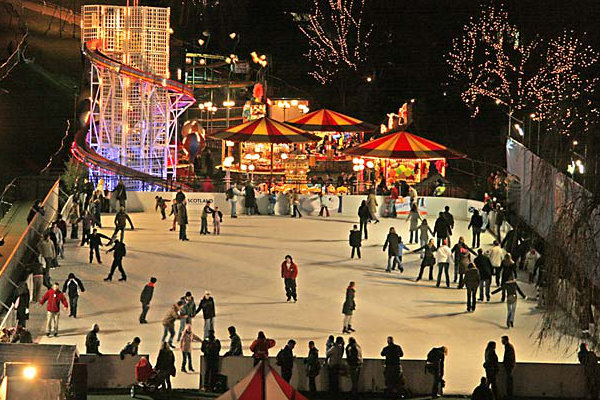 The stunning, Gothic Winchester Cathedral becomes a festive Christmas hot spot over the holiday season. The ice rink and Christmas market take over the cathedral's inner close, creating an atmosphere that blasts joy around like a happy snow cannon. Log on to their website to find out more about Christmas services and other events taking place around the ice rink this year. 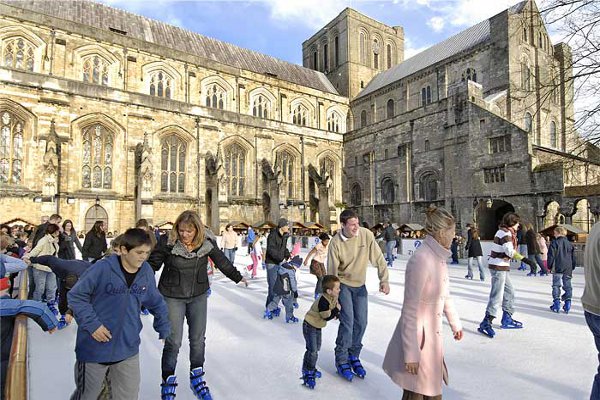 Spinning Fields is the quintessential Urban outdoor skating venue. It's situated in the heart of Manchester, in the liveliest hub in the city, making it ideal for people on their way home from work or uni or school, or anyone wanting to get a bit of exercise during the lunch hour. Over the weekends and on bank holidays, you can expect families to roll in and take advantage of the ice rink while it's there. Book in advance if you are going on a Saturday! Don't worry if you are not crazy about spending the whole day falling over - one of the great perks is the nearby Moose Bar,where many an ego will be nursed. You can almost skate through the front door when you're ready for a pint or a rejuvinating cuppa. 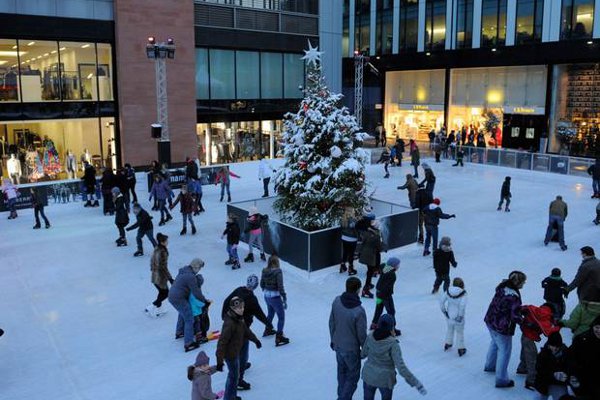 One of the great things about living in a city like London is having so many incredible landmark buildings to visit at your leisure. Another prominent historical site plays host to one of the city's most popular ice skating sites. The Tower Of London rink is located inside the moat, giving visitors a new perspective of the old fortress. At the Ice Rink Cafe, you can warm your frozen mitts with a cup of mulled wine or hot cocoa. If you are going in a large group, be sure to call ahead of schedule and book your slot. 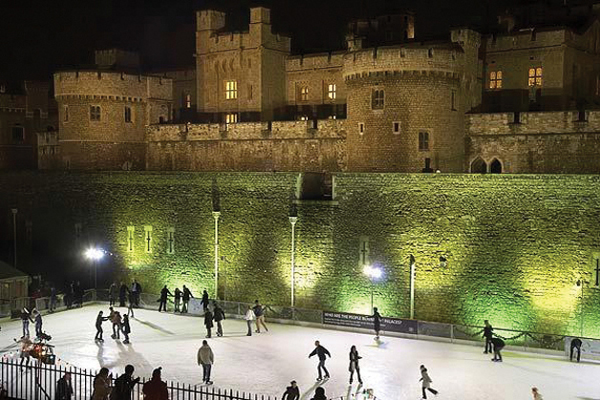 This year marks the fifth anniversary of Winter Wonderland in Hyde Park - one of London's finest venues for a Christmas extravaganza. To celebrate this auspicious occasion, entrance is totally free. The 20 acres of open land are decked out with splendid decorations that will enchant young minds and blow older ones.

Keep your eye balls peeled when you're strutting your stuff on the rink. Besides watching out for fellow skaters passing by, you may also spot a few of the more popular guests who've been known to frequent the rink - the likes of Prince Harry, Chris Martin and company. 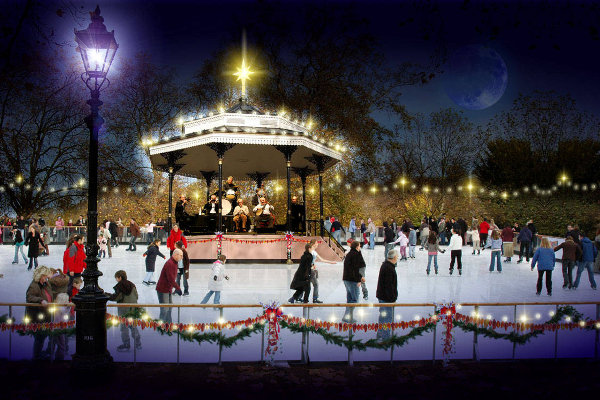