Before the speed and efficiency of air travel, cruise ships were the best way to travel. In many ways the act of seeing the world has become something like fast food - quick, pre-packaged and lacking substance. Holiday makers looking for a holiday that is more about the journey than the destination will enjoy the haute cuisine experience that is cruising. Below you will find our list of sea-worthy destinations and learn about some of their hidden highlights...
Wherever you're sailing, all our policies can provide extra cover for missed shore trips, cabin confinement and additional personal belongings, with our cruise travel insurance add-on. 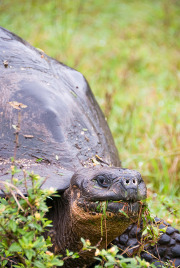 The Galapagos archipelago inspired a scientific revolution in the form of the theory of evolution and natural selection. The unique natural conditions on the islands were responsible for Charles Darwin's eureka moment on the HMS Beagle voyage of 1835. Expedition cruises around the islands of Galapagos take you to the very same islands that Darwin visited and the less crowded outer islands.

Don't leave without visiting Lonesome George, the last known Pinta Island tortoise. At the ripe old age of 100, he has become an international celebrity, with a $10 000 bounty available for anyone who can find him the perfect mate. He already has a harem of suitors (from another closely related subspecies), but still no offspring. The environs of the archipelagos are a delicate ecosystem, so ensure that you cruise with a operator who respects the environment.

The South Pacific is a wide expanse of ocean that includes well known islands like Tahiti, Bora Bora, Fiji and Samoa. A cruise in these parts is for those who dream of just disappearing into the azure. There is no better place to stop by than the island that even the locals call paradise. Mo'orea - just off Tahiti - best known as the heart-shaped island, which makes it a favourite of lovers and couples on honeymoons. You'll find all the expected modern amenities here without that artificial Hollywood sheen that some islands are known for. Once you're done being mesmerised by the island visit its lagoons for some snorkelling in the clearest waters around or take in the stunning views of other French Polynesian islands from Belvedere Lookout - not for those who fear heights as it has some really steep slopes. Braver souls can try paragliding off the islands hills or take a helicopter tour of love island.

The cold coast of America's northernmost state may not appeal to those of us running away from winter weather, but the American northwest is filled with those sorts of sights that demand awe - some of which may not be around for much longer. Alaskan cruises usually depart from Vancouver, which is a city well worth exploring before the cruise, and travel up the Canadian coast to Alaska. Sights to savour include the calving face of Hubbard glacier, where huge bus-sized splinters of ice break off the glacier, and a trip up Tracy Arm Fjord - an ice field that can be traversed by boats for an up close look at newly born icebergs. 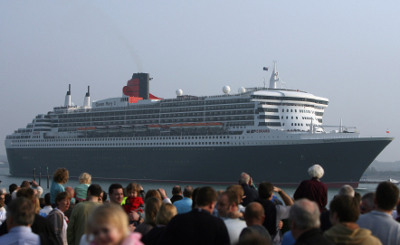 The transatlantic is a route taken by only the greatest ocean liners; liners that hark back to the glory days of ocean travel (pack the penguin suit, a monocle and a pocket watch). Although some may not enjoy day-upon-day of open blue ocean, the on-board experience is six days of blissful luxury. Liners like the HMS Queen Mary II (QM2) have a long list of activities to occupy the time between leaving Southampton and sighting the Statue of Liberty. Where an ocean liner like QM2 really surpasses the average cruise ship is in its extensive cultural and intellectual enrichment programme. The liner can lay claim to one of the largest floating libraries and collaborations with esteemed institutions like Oxford University, the Royal Academy of Dramatic Arts, the Royal Astronomical Society and a vibrant book club. Certain cruises also include guest appearances from musical heavyweights like the Julliard Jazz band and National Symphony Orchestra.

The Beach Boys were on to something when they sang about a place 'off Florida Keys where you wanna go...to get away from it all.' Though Kokomo may not exist, the Bahamas are real enough. Escaping for a few days is the perfect way to sample the Caribbean lifestyle. The destination is a popular getaway, which may not make it ideal for those looking for a less overtly commercial experience. But for the rest of us a cruise to the Bahamas is an ocean fiesta. Recently, cruise lines like Disney, Princess, Norwegian and Holland America have begun to offer themed private islands as part of their cruises. Private island getaways like Princess Cay (Princess), Castaway Cay (Disney) and Great Stirrup Cay (Norwegian) have beachside barbecues, watersports, family activities and a beach party vibe that is a Caribbean staple.

The east African coast has received a lot of bad press with pirates (not the cute Pirates of the Caribbean type) and famine making the news recently, but the south eastern corner of Africa - that includes Mauritius, Madagascar and Mozambique - is a world away from those hotspots. The Indian Ocean is vastly under-represented on lists like this, but what it lacks in quantity is made up by quality. The island of Mauritius may hog the limelight with its well developed tourism sector, but Madagascar is the definition of a Garden of Eden. The islands isolation from Africa has created an ecosystem unlike anywhere else in the world. Animals like the lemur (small monkey) and fossa (a small panther-like cat) cannot be seen anywhere else in their natural habitat. The island of Nosy Be, off the north-west coast of Madagascar, is as polished as any other island resort with less tourists and a lot of Malagasay charm.

The premier cruise destination in the world has a well earned reputation. It's impossible to encapsulate everything Mediterranean except to say the weather is hot, the beaches are stunning, the islands are beautiful and the yachts are mega. Travellers have a range of choice from the French Riviera, the Greek islands, Italian Liga or the Spanish Coast del Sol. Although the summer months can be packed, there are still some less popular destinations in the Eastern Mediterranean - like Croatia's Dalmatian Coast. There are more than a thousand islands off the coast of Croatia, so there are plenty of places to hide from the crowds.

The Persian Gulf has the benefit of surprise for those willing to give it a try: unlike many of the other destinations on this list, its ports are not widely known - except maybe for the attention-hungry Dubai. Cruises travel between the United Arab Emirates (UAE) and Oman over the Straits of Hormuz. The contrast between the ports is striking; from the modern skylines of Dubai and Abu Dhabi to the rustic dreamy Khasab. The latter is something of an enigma - an arid port town with fjords and dolphins in its waters. Just off the coast lies Telegraph island, named so because it was part of a project to connect India to London by telegraph - a desolate reminder of the grand enterprise that was an empire. The area is undergoing rapid development so there is no better time to take a cruise to this undiscovered Arabian gem. 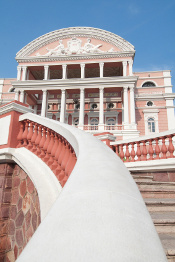 A lesser known cruise destination is the Amazon river cruise through Brazil. Some cruise routes include a cruise down the Amazon as part of a longer cruise - usually from Florida. The most important port along the Amazon is Manaus, the capital of decadence during the rubber boom of the 19th century and where the waters of the tea coloured Rio Negro meet the Rio Solimões to mark the beginning of the Amazon. The symbol of the cities bygone era of wealth is the restored opera house - the Amazon Theatre - which is worth a visit to see the extravagances the city was known for. For nature lovers, the jungle is a constant presence on the cities' boundaries and there are some good shore excursions to be had. The best of which are the alligator sightings, which you must fit in - if only to feel that creeping fear that only encounters with large reptiles inspire.

1. MS The World: The ultimate cruise experience is more a shared private mega-yacht than a cruise ship. The ship sells flats that are owned by the residents who hold an itinerary vote to decide which way to point the bow. As expected - prices are ludicrous, but the experience is luxury-on-luxury for those lucky enough to snap up the 165 residences available. The floating block of flats has all the expected amenities - shops, restaurants, film theatres - and extras like a golf course and lectures from guest speakers. To experience a slice of luxury there is always the 'cheaper' (relatively speaking) rental option for a leg of the journey, but expect to part with a sheaf of money for the privilege.

For more in-depth information on all these cruise destination see cruisereviews.com

Finally - take out our Cruise travel insurance to ensure you are covered.