A well known whisky brand has the slogan "keep walking", which is what we'll be encouraging you to do in the most famous cities in the UK and around the world this month. What better way to get better acquainted with cosmopolitan cities than at street-level where you can feel the cobbles, taste the street food and get the authentic experience - what's more, a self-guided walking tour is free. With a knowledgeable guide (or an mp3 player for an audio guide) to show you the way, you can peer past the brochure image of a city to see its deeper history and culture. Step out the hotel or home and as the saying goes "keep walking".

Cities in the UK 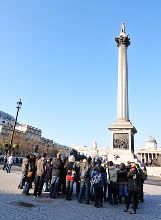 Samuel Johnson, the 18th century giant of English literature, once said that "a man [who] is tired of London, is tired of life", which still holds true today. Even for the locals, a stroll down a street of historical significance, of which there are many, is something to savour and enjoy. The established name in walking tours is London Walks, the original walking tour company for London town - but there are a number of others that offer more niche type tours:

Liverpool puts the 'H' in history with its seven H-shaped foundation streets; Water (formerly Bank) Street, Castle Street, Chapel Street, Dale Street, High (formerly Juggler) Street, Tithebarn (formerly Moor) Street and Old Hall (formerly Whiteacre) Street. Harking right back to the orginal settlement formed in 1207, these streets are a living record of the city's growth into an important node in the slave trade, for which you can take a walk on the Slave History Trail with Eric Lynch, and its later transformation into the economic centre it is today. But what the city is most well known for are the four mop-topped musicians who defined an era - the Beatles. For a Beatles experience to savour, Pool of Life tours offers a day-long Beatles Extravaganza Tour including stops at the original Strawberry Fields (an estate where John Lennon used to play at as a child), the childhood homes of all the Beatles, Penny Lane and the real Eleanor Rigby's grave. 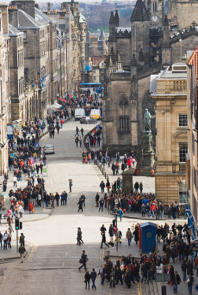 The relatively 'New' Town of Edinburgh was a response to the increasingly chaotic and overcrowded Old Town with its logical Enlightenment-inspired design, but for looks you just can't beat the timeless beauty of the Old Town's cobbled streets and old-school high-rises. Though other cities may have soaring skyscrapers, the buildings of Old Town were reaching up into the sky well before the term was in use. The most accessible way to sample the best of Old Town is to hoof it down Royal Mile - from the Castle to Holyrood Abbey. Auld Reekie Tours offers a free historical tour of St. Giles' Cathedral or buy a downloadable audio guide - retailing at Â£6 - for a self-guided walk; if walking on an empty stomach is not your style, take the Eat, Walk Edinburgh - unique dishes, fine whiskies and access to some of the most exclusive kitchens in the city.

Gotham, the Big Apple, the Capital Of The World (we beg to differ, but let's let it slide for now), the City That Never Sleeps, Empire City. The city with many names is a secular haj that every traveller should indulge in at least once in their lifetime, if only to stand in Times Square and bask in the glow of the neon lights - but there are plenty of other streets worthy of your attention too. The tour of choice for film and T.V fanatics is Screen Tours. Viewers of Gossip Girl or Sex in the City will recognise some of the stylish haunts of New York without having visited there, but sipping coffee at Blair's favourite coffee shop or enjoying some girl time where the fab four meet is the 'movie star' experience. 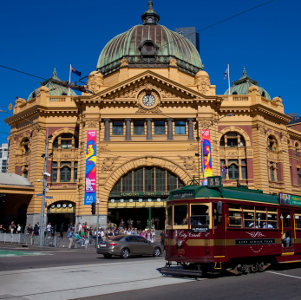 Melbourne has the most extensive tram network in the world, so we'll forgive you for cheating a little bit by taking a tram. The City Circle trams are a free and convenient way of getting to interesting places - like the multi-purpose Federation Square (with attractions like the Ian Potter Arts Centre, the Australian Centre for Moving Image), the Immigration Museum, Melbourne Aquarium and Parliament House - with the added bonus of audio commentary (on the trams) to guide and inform you.

For Jerusalem, sandals have been the footwear of choice since biblical times. If you can buy yourself a cheap pair, a day spent walking through the fount of the three Abrahamic religions - Judaism, Christianity and Islam - is an experience you can't find anywhere else. The holy sites of the Wailing Wall, Al-Aqsa Mosque and the Church of the Holy Sepulchre should be part of every Jerusalem travel itinerary, but what sets the city apart is the fervour of its inhabitants. Pick any religious holiday to visit the city to witness a multitude of processions or any of the many spontaneous religious gatherings. Try New Jerusalem Tours for tours.

Unlike most other cities, Washington's streets are literally lined with 'the corridors of power.' Decisions made here reverberate throughout the world, but for the tourist these majestic buildings are a line-up of living history. Whether you're taking a turn near the White House, Congress, the National Mall or Arlington Cemetery, the record of America's history and present is laid out before you. Free Tours by Foot offer a comprehensive programme of Washington sights that includes a tour of the fateful night when Abraham Lincoln was assassinated at Ford's Theatre. We recommend you take their longer weekend walks and don't forget to book your place in advance.

The beauty of a city-state like Singapore is that everything to see in the country is within the metropolis. The condensed beauty of an entire culture and country are best experienced on foot, with a few Singlish (a colloquial type of Singaporean English) phrases to get by. The folks at Summer Footprints are the recognised name in guided tours through this colourful city. Whether you want to take the Little India Tour (on Tuesdays and Fridays) or, with its Tamil influences, a tour of Chinatown (on Mondays and Thursdays) through the Outram district, or the comprehensive half-day city tour, you will be left dizzy with the sights, smells and food from the rising travel gem of the Far East.

Although better known for the wall that separated it into two, the now whole city of Berlin has grown into the cosmopolitan and financial centre of continental Europe. Berlin Walks has a menu of ten walking tours to cover almost all that Berlin has to offer, with a particular emphasis on history. If you're a WWII fanatic the Infamous Third Reich sites tour will take you right into the heart of what remains of the Nazi regime, right up to the bunker where Hitler committed suicide. For more modern history the Berlin Divided Tour visits the most important sites in the city's divided history during the Cold War and for a more cheery fare the gardens of Potsdam nearby are a must. 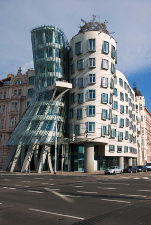 Prague's buildings are an architect's playground and a joy for walkers more accustomed to grey city blocks of mediocrity; styles ranging from Art Noveau to Baroque to Odd litter the streets. Odd? Yup, the inimitable Dancing House, to the right, defies logic and reason. Some see the swaying hips of a dancer in its shape (the dancers who inspired the shape are Fred Astaire and Ginger Rogers), but we're more inclined to imagine a boxer taking a stiff blow to the abdomen. Prague Walks makes good use of two hours with their mazy walks through the stunning buildings across the town: highly recommended is the New Town tour through passageways, elegant cafes and a Palace. Running shoes are recommended, but you'll feel hopelessly underdressed in your elegant surroundings.