Belfast is a city still in the flower of her youth, despite enduring a difficult period of violence in the 20th century. Wherever you look, new developments are changing the city's landscape, from the Titanic Belfast in the foreshore area to the revived city centre. Check out our schedule of Belfast sights and sounds for the best the city has to offer.

On the grounds of Queens University are the precedent-setting gardens of Belfast Botanical. Their most notable feature being the Victorian-era Palm House conservatory; the curved iron and glass dome was an architectural feat well ahead of its time - soon copied by every respectable garden in the Empire. The unique design of the Palm House allowed the growth of exotic plant forms. Tropical Ravine, the sister conservatory to Palm House, has a similarly innovative design that allows the growth of the Dombeya plant - the flowering of these plants in February is worth planning your visit around.

Within the garden you'll also find Ulster Museum - a multi-purpose museum of arts, numismatics (the study of currency), zoology and everything in between. Best of all: entrance to the museum is free.

Brightâ€™s is a franchise of Irish restaurants located conveniently close to Belfast landmarks. The best way to kick off a day about the town is their Ulster Fry breakfast: bacon rashers, sausages, eggs, potato bread, soda farl and mushrooms - all fried. What's more, this is a meal that you can eat all day, every day. If there's still space in your stomach they also make a mean Irish Stew.

The other great Victorian project to have made an imprint on Belfast is St. George's Farmers Market. Underneath its cavernous roof, all manner of farm fresh foods and exotic delicacies are displayed. The market has a three-day run from Friday to Sunday; each day with a specific menu of items on sale: 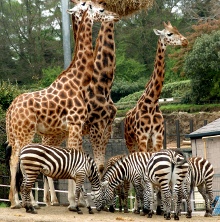 Located in a quiet corner below Cavehill mountains is Belfast Zoo - an asylum for some of the most endangered species in the world: Rothschild giraffes, Malayan sun bears and Moloch gibbons are amongst the more interesting residents of the zoo. Additionally, the zoo has a walkthrough tropical rainforest, replete with exotic birds like the island hopping nicobar pigeons and the fulvous whistling ducks. All in all, enough of a cast of animals for a Pixar animated movie and a great family day out. 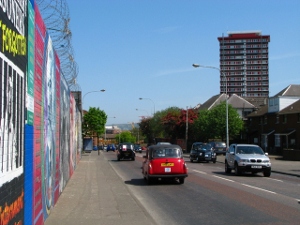 The Good Friday Agreement of 1998 brought to a close a sad period of sectarian violence in Northern Ireland known as the Troubles. Marks of that time are prominent throughout the city, especially in the Falls Road area in West Belfast and in the Peace Walls, that separated communities (much like the Berlin Wall) that dot the city. The road is lined with murals in support of various sides in the conflict; most notably, a mural of Bobby Sands - who died in a hunger strike while imprisoned. Various tour groups operate in the area, but the Black Taxi Tours that pass through are the best way of getting the complete experience.

Happy-go-lucky cycling through the city of Belfast is the best way to recapture that child-like sense of discovery that is so often lost in adulthood. Belfast City Bike Tours offers a relaxing - and not too strenuous - three-hour cycle past the top twenty tourist attractions. For a reasonable Â£15 you get to see street-level Belfast and maybe earmark a few places to visit later.

A little known fact is that the Titanic was actually built in Belfast and not Liverpool, where she was only registered. In an effort to reunite the ship's history with the city, Belfast has recently opened the Titanic Belfast; the site of all things Titanic - from its birth on the slipways to its demise in the cold North Atlantic to its rediscovery in the 80s. The museum is part of a redevelopment of the foreshore area into an entertainment area and tourist destination. The museum itself includes nine exhibition galleries (with artifacts, visual displays and interactive sections) about not only the Titanic, but her sister ships the RMS Olympic and HMS Britannic too. 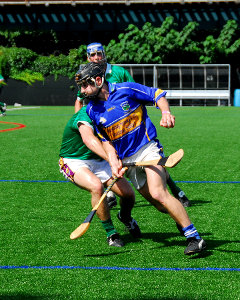 The Gaelic Games of hurling (a game involving sticks, tackling and balls hurled at incredible speeds) and Gaelic football (imagine the midpoint of a game of rugby and one of football) are the most popular sports in Ireland. The intense rivalries and fervent supporters make it the perfect sporting occasion to experience something of that Irish spirit. The main venue for these events in Belfast is 32 000-seat Casement Park, home ground to Antrim County (of which Belfast is a part) hurling and football teams. Check out the Antrim County website to see the schedule of games available - even a junior match is worth dedicating an afternoon to.

The all-Irish Gaeltacht Quarter of Belfast is where you'll find the cultural heart of the city - Culturelann MacAdam O Fiaich. Neo-Gaeltacht quarters throughout Ireland were designed to revive the love of Irish language and culture within the cities. Culturelaan MacAdam O Fiaich serves as the vehicle for that goal in Belfast; whether it be music, theatre, art, television and more recently technology, there is no better place to engage - as a visitor or a resident - with Irish culture. 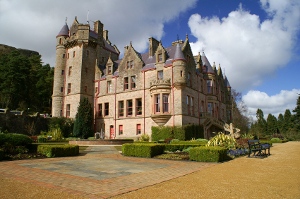 The popular wedding venue overlooking Belfast is like a fairytale mansion (Prince sold separately). Views extend through to Belfast Lough and the Irish Sea beyond. The site may not have a history extending back as far as some of the other castles in the UK, but you'd be hard pressed to find one with a wildlife park attached. Cave Hill Park nearby has extensive trails to while away the hours playing at fairytales or living them for couples looking to tie the knot.

The Lyric theatre recalls a time when players (i.e. the artists) would band together to own their own stage. The theatre was formed in the 1950s by the artists of Belfast and has recently been revived through the efforts of some of its most famous sons - actors Liam Neeson and Kenneth Branagh. The first production from the revival period - Arthur Miller's The Crucible - has already won two Irish Times Theatre Awards.

McHugh's is more living history than just another bar. The building that houses it has stood since 1711 and some form of drinking establishment has been housed in it since 1715. With the Crown Liquor Saloon, she stands as an example of that proud heritage that Belfastians hold so dear. When you're having a tipple in its august atmosphere, spare a moment to look up at the centuries-old wooden beams that hold it together and take in the history before the rest of your night becomes a blur of good times.

In line with the recent drive towards redeveloping the city centre, Victoria Square has become the shopping destination in Northern Ireland since its opening in 2008. The futuristic glass dome of its main atrium is like a beacon, calling all shopaholics to the South Quarter of the city centre with four floors of retail, entertainment and dining. Pop in on a Sunday for the Sunday Fayre - handmade goods galore at bargain prices.

Jazz requires a certain type of establishment to do justice to the music. As such, the hotel named 'The Best UK Hotel in 2011' and with the 'World's Best Hotel Bar' is the perfect place to fit in a jazz bar with all the requisite touches to evoke the feel of a 1930s New York Jazz bar. With live jazz all week and platters of food fit for the most cosmopolitan palate there is no better place for late night entertainment. 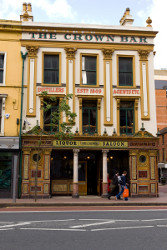 This Victorian-era gin house is a page out of the 19th century that does class with a capital C. Old school booths (called 'snugs') allow you to drink quietly with a friend in the privacy of an intimate space, with bells to call the help for more drinks. You'll feel like brushing up on your current affairs for discussions with your fellow patrons and wearing a top hat to match the bar's sophisticated vibe.