Scenic canals, world-class galleries, and a lot of people on bikes ... there's far more to Amsterdam than its notorious red light district and 'herbal' cafes. Rent a bicycle or hop on a barge, and explore the city's colourful markets, chi chi boutiques, hip bars, kid friendly museums and free public art, in our 24 Hour travel guide to Amsterdam.

Begin your day with a free 15-minute ferry ride from behind Centraal Station to NDSM in Amsterdam North. These former ship-building yards now make up a 'creative wharf', home to MTV's European offices and a whole gaggle of artist studios - some of which are open to the public. It's a watery and apocalyptic wonderland - and perfect for a misty morning stroll.

Not only does NEMO - the science and technology museum - offer a fantastic hands-on adventure for kids, but from its green copper roof you get a breathtaking panoramic view across all Amsterdam. Highlights include the picturesque old city, the modern architectural wonder that is the new public library and the Eastern Docklands boardwalk.

De Bakkerswinkel is a fantastic bakery chain, serving up killer coffee and delicious freshly-baked pastries and sandwiches. Grab it to go so you can explore the surrounding Westergasfabriek - the city's gasworks now converted into a prize-winning 'cultural park' with kooky shops and galleries. 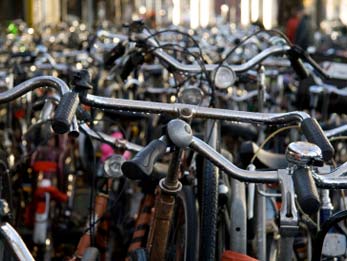 In a city that is home to over 700,000 bikes, cycling is the real deal when it comes to getting around. Almost everything is within pedaling distance. Feeling fit? Head south up the Amstel river towards Oudekerk - a favourite sketching route of Rembrandt. Rent a bike from Frederic, for Â£10 a day.

Diamonds and Amsterdam go hand in bejewelled hand, right back to Holland's Golden Age in the 16th century, when the city was at the heart of world trade. Coster Diamonds is one of the city's oldest diamond factories (dating back to 1840 - Queen Victoria was a customer). But it costs nothing to look: free factory tours run from 9.00am to 5.00pm.

Housed in a former orphanage, Amsterdams Historical Museum traces the city's history from the Middle Ages through to the present day. It's a brilliant mix of dazzling grandeur - from the Civic Guard Gallery to the picturesque Spui, a square devoted to books - and fruit-loop quirkiness. 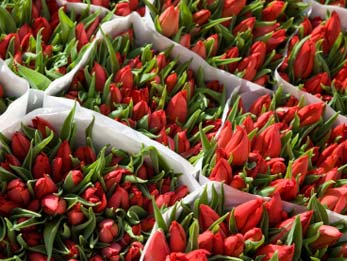 The Blomenmarkt sells tulips and it's on a canal - no wonder it's become such a popular tourist attraction. It's still worth a visit though - and the adjacent cafes lining the canal, are the perfect place to grab some lunch and admire your newly purchased tulip, clog and windmill fridge magnets.

Anne Frank was given a diary for her 13th birthday. In it she wrote the details of her day-to-day life, which was soon to include hiding from the German forces occupying the Netherlands during World War II. You can see the secret annex where the world's most famous Holocaust victim and her family hid for two years before being betrayed to the German authorities, as well as the original copy of her famous diary. Entrance is Â£9 for adults, Â£4.50 for children.

Welcome to the country's largest outdoor market (300 plus stalls and counting): Albert Cuypmarkt. Chaotic but colourful, this street-market is a prime people-watching location as well as a great place to stock up on fruit and veg, clothes, furniture, jewellery, shoes... It's cheap, too.

Take a breather and enjoy the city's best locally-brewed beer served on the patio of Brouwerij't IJ, an award-winning brewery built from a converted bathhouse. And if that's not reason enough, the brewery sits in the shadow of De Gooyer, a bona fide Dutch windmill. 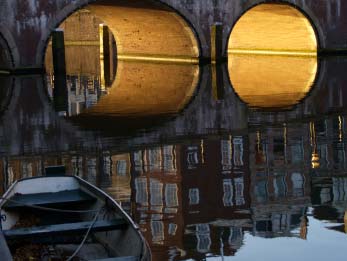 Rent an electrical boat from Boaty and hum quietly around Amsterdam's 150 canals, which wind over 65 miles throughout the city. The canals around the Red Light District get pretty crowded, especially on weekends when the Stag Dos are out in force.

Vondelpark is 120 acres of parkland in the heart of the city, featuring an open-air theatre, beer houses, a modernist tea room, bike trails, lakes and a film museum. It's even got a sculpture by Picasso! What's not to love.

World-renowned distillers Wynand Fockink, has been serving their home-brewed jenevers or Dutch (ie the original) gin since 1680. In their atmospheric 'tasting room', lined with antique bottles and drinking glasses, you can also try colourfully named liqueurs such as 'Parrot Soup' and 'Assurance for Bitter Suffering'.

The king of Dutch cuisine is Indonesian, and its crowning glory is rijsttafel (rice-table): a spicy reworking of every known fish, meat and veg served with rice. This micro-extravaganza is a feast for the gods. There are excellent Indonesians all over town, but new kid Blauw is rightfully-hyped as the best.

Catch the latest cinematic releases at the Tuschinski Theater: a truly mind-blowing deco masterpiece, built in 1921 by its namesake Tuschinski, a Polish tailor-cum-architect. Get the most out of the experience by pre-booking a box seat and ordering a bottle of bubbly.

Time for a quick sauna. Former squat, fabulously renovated - Fenomeen features a Turkish steambath, Finnish sauna and an array of wet and dry rooms, all beautifully and imaginatively decorated. The building still exudes the free and easy vibe for which Amsterdam was once famous. Saunas cost between Â£4-8, open until 11pm.

The Dylan was always destined to be dramatic: this former theatre transformed into full boutique hotel-luciousness by Anouska Hempel, is in the heart of the glam Nine Streets shopping district. Order a cocktail at the public bar, and get ready to rub shoulders with Amsterdam's high-flyers. Possibly the odd celeb too - Kylie Minogue and Nick Cave have both been on the guest list.

The grand-daddy of Leidseplein nightlife square. Housed in a former church (hence the name) Paradiso (along with neighbouring Melkweg) is one of the great legends of Amsterdam's live music scene - the Rolling Stones, the Sex Pistols, Nirvana and Amy Winehouse have all played here. These days you're might just catch a lecture or a play here too.

Bars don't stay open late on week days, but no need to panic: simply park yourself on a bench, and give those nice lads at Beer Taxi a call! That's right - this is a round-the-clock beer delivery service. Bless those Dutch. 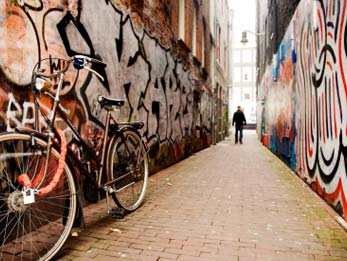 Amsterdam has a thriving arts scene, and one of the most popular modern mediums is graffiti. Tapped into the skater/bmx/music subculture, there are graffiti festivals throughout the year - often in association with the mainstream art galleries. 2.00am, the streets are alive with graffiti artists...

Wee small hour munchies? Pull a deep-fried snack from the wall at FEBO. Yes, the city which brought you the Beer Taxi, also features vending machines which sell burgers, kroket (a potato and chicken snack), kaassouffle (a deep fried cheese sandwich) and other delicacies. Yum.

Is it clubbing - or is it theatre? Who cares: DJs, VJs, artists, photographers, poets, and live performers all do their bit to keep it sweet at the Sugar Factory - and on weekends, it's open until 5am. Keep an eye out for the Sugar Factory booklet around town to find out what's what.

Arguably the most beautiful canal of them all, the Prinsengracht is pefect for a quirky late night/early morning stroll. As the flower wholesalers unpack their wares, artistic souls will notice how the waters of the canal glow purple in the moments before dawn.

Hang out at the airport. No, really - the futuristic Citizen M hotel, by Schiphol Airport, is the latest in "affordable luxury" and choc-full of really cool gadgets too. Hang around the automated canteen (open 24 hours) or go to your room for the full design experience (from Â£80 per room per night). There's a Citizen M Amsterdam City, too.