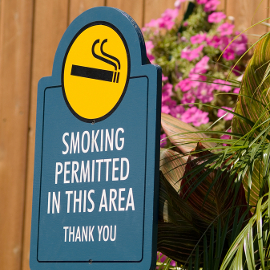 When it comes to smoking, most people are on opposite sides. You either hate it, or you smoke it. So imagine the thought of smoking in airports. We found out which airports allow smoking and where you're allowed to take that break before you jet off to another land, or to a place that's just two hours away.

Major airports rarely allow smoking - can you imagine the complaints that would come in? So if you're thinking of taking your box of ciggies out while waiting in the departure lounge of Heathrow Airport, think again. You might just find yourself with a cigarette in one hand, luggage in another and two security guards escorting you out. Much to the chagrin of non-smokers (who seem to believe that smokers should only be allowed to smoke in tiny broom cupboards with their name on it and no windows), there are designated smoking areas available outside the terminal buildings at Heathrow. If you're about to board an 18 hour flight, you may want to use it as an opportunity to give up smoking because it's strictly forbidden while you're on the aircraft.

Some airports have smoking areas

The more lenient airports have a number of designated smoking areas - from bars and lounges to cabins and cafes. Amsterdam Airport Schiphol is a little different. They have convenient plexiglass smoking boxes, because, you know, non-smokers love walking past and giving judgemental side glances while smokers sit in their glass rooms and grin smugly - it really is very entertaining for onlookers. It seems that the UK's major airports are the mom and dad of smoking - they're all strictly non-smoking airports inside. Amsterdam Airport Schiphol is the cool older brother and the US, whose five major airports allow smoking in designated areas (and not just outside terminal buildings) is the cousin who allows you to do some things but draws boundaries. 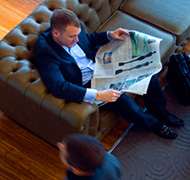 On a more serious note, recent studies by the Centre for Disease Control (CDC) show that even though airports that allow smoking in designated areas inside have good ventilation, it's not enough to prevent the harmful results of second-hand smoking. So while the UK may be stricter, it certainly is fairer. For those of you who want to find out which airports allow smoking and where, you're in luck - there are a number of websites dedicated to just that. www.smokingtransit.com has proved to be quite a useful site for information.

Having lived in the same house for 18 years, Caelyn decided it was time to pack her bags and head out an adventure. The trip took her to the tiny place of Grahamstown in South Africa where she majored in Journalism and English at Rhodes University. Fresh out of university and having lived the student life for the last four years, she is slowly adapting to working at Essential Travel under the guidance of senior writers. She finds comfort in the smaller cities of the world nestled away in Europe, Africa and South America.